Dating back to the mid-1800s, residents from all over Van Zandt County traveled to Canton, the county seat, to watch court proceedings and take care of business.

Many brought their own goods to sell or trade on Trade Day. Canton's First Monday earned a statewide reputation as the best place to buy a good horse.

By 1965, First Monday Trade Day had outgrown the Courthouse square, and the City of Canton purchased 6 acres of land two blocks north of the Courthouse as the new location of the monthly sale.

Over the years the sale expanded to include the weekend prior to the first Monday of the month.

Today, trade days are Thursday through Sunday prior to the first Monday of the month, year round.

In 2021 First Monday Trade Days continues to grow, and evolve, and has gained national publicity and awareness.

On the first Monday of each month in the early 1850s, Judges Oran M. Roberts and Bennett H. Martin held court in Canton, an event attended by townspeople and country folk alike. With large numbers of people present, court day also became the occasion for the common practice of auctioning stray horses. Within a short time horse trading and selling were prevalent and the day called "Hoss Monday." After a few years the First Monday Trades Day expanded to include all kinds of goods. In 1965, the city purchased these grounds for the monthly event. (1973) 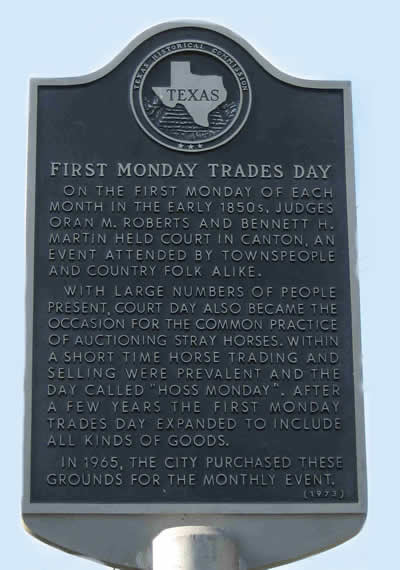 Copyright © 2021 • CantonTxFirstMonday.com • All Rights Reserved
This website is operated by a private entity with no connection to, or affiliation with,
the City of Canton, First Monday Trade Days, or any shopping venue